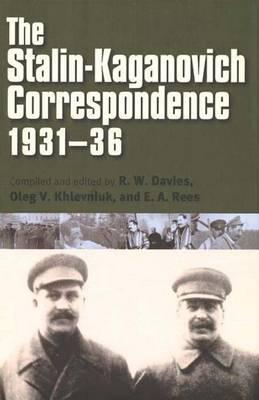 From 1931 to 1936, Stalin vacationed at his Black Sea residence for two to three months each year. While away from Moscow, he relied on correspondence with his subordinates to receive information, watch over the work of the Politburo and the government, give orders, and express his opinions. This book publishes for the first time translations of 177 handwritten letters and coded telegrams exchanged during this period between Stalin and his most highly trusted deputy, Lazar Kaganovich. The unique and revealing collection of letters--all previously classified top secret--provides a dramatic account of the mainsprings of Soviet policy while Stalin was consolidating his position as personal dictator. The correspondence records his positions on major internal and foreign affairs decisions and reveals his opinions about fellow members of the Politburo and other senior figures. Written during the years of agricultural collectivization, forced industrialization, famine, repression, and Soviet rearmament in the face of threats from Germany and Japan, these letters constitute an unsurpassed historical resource for all students of the Stalin regime and Soviet history.

Together with Love: Bonus Scenes Collection Going Home Under the Bed Deep as the Rivers Desired This Won't Scale: 41 Plays From The Drift Marketing Team To Help Your Business Cut Through The Noise, Grow Faster Than The Competition & Thrill Your Customers Shopping for the Real You: Ten Essential Steps to a Better Wardrobe for Every Woman - Fashionistas, Fashion-phobes and the Over Fifty The Paris Diaries, 1941-1944 Jack Riordan's Baby Germinal